Some months ago Marty.js creator announced that v0.10 was going to be the last major release. This were sad news to me as I've been using Marty as my Flux implementation of choice for several months in many different projects, I have also written some posts about it and I really love it. He also commented that he had started using Redux and recommended everyone to check it out. So that's what I did.

Redux to the rescue

After visiting Redux's website and reading it's documentation I ended up with the following conclusions about it:

So wrapping up, we have a single store with all the state of the application. To trigger a status update we use action creators functions which return an action object that has a type to identify it and the data for the change. To apply this changes we have to write a reducer function which will return the new state combining the current state and the data provided by the action.

A little less talk and a lot more Redux action

Now that we now the basics, let's start coding some real stuff. I have cloned my good old Rails and Flux project and re-factored to use Redux instead of Marty. 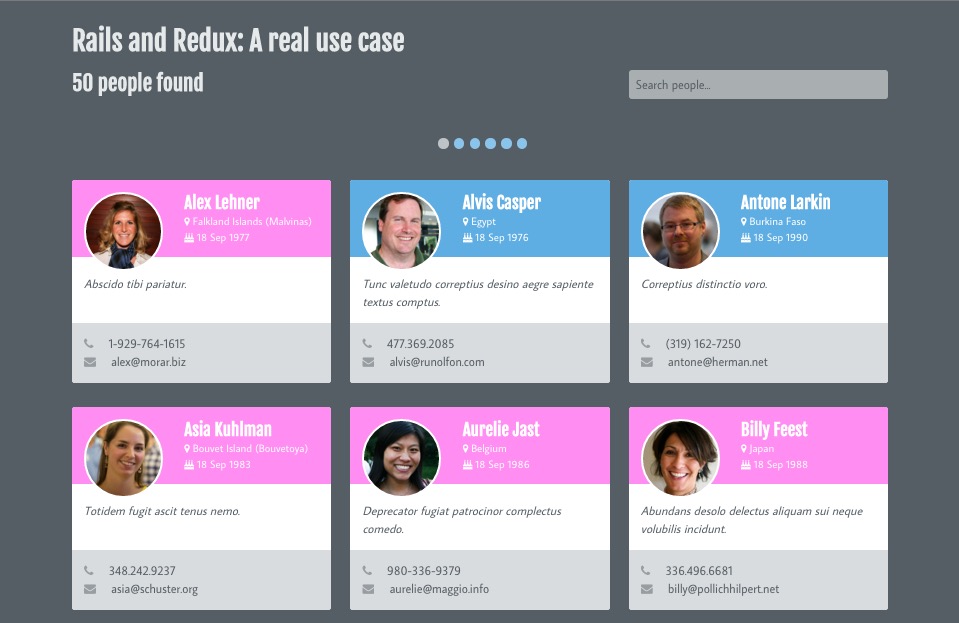 Since I've started working with Redux, I like starting writing my reducers first, so I can design how the state is going to look like.

We combine all the reducers so the state will have a people object with all the list of contacts, search and pagination related data:

And also a person object storing the data of the person we click to see his details.

Now that we have our state tree designed, let's connect one of our components to the store and specify what state is going to be passed as props to it.

We're rendering PersonCard components iterating over the people prop. As we are connecting it to the store and mapping it to the state.people object, the component will have people, meta, search, isLoading and pageNumber as props. Easy as pie!

So right now the component will render an empty list because we have no people in our initial state. To get the initial list and update the state we need to create an action, so let's do it.

With the fetchPeople action creator we're making a call to the Rails back-end API and dispatching the RECEIVE_PEOPLE action with the resulting response. No we need to reflect this in the state, so let's change the previous reducer to return the new state tree when this action gets dispatched:

Now it is evaluating the actions type and if it corresponds to the one it's expecting, we create a new state tree merging the existing one with the returned people array and metadata object from the action. The store will replace the current state with this one returned, causing the component to render again and showing the people cards.

Now we only have to call the action creator once the component renders for the first time:

To show the next page of results we need to call the back-end passing the page number we want. To do so let's update a bit more our component:

When a page link is clicked the PaginatorSection component calls the _fetchPeople function passing the pageNumber which calls the previously described fetchPeople action creator, and beginning the cycle again.

Although this is a very simple example of how to use Redux, it's good enough to show how easy is using it. I have to say that at the beginning of switching from Marty I was very confused and I missed a lot of concepts I already was using. But now that I use it almost every day I just love it. Managing the state in my React applications has being reduced to writing simple action creators and reducer functions, with no surprises or unwanted side effects. If you want to learn more check out it's awesome official documentation and also the source code of the example project we're you'll find a bit more complex functionality like searching and using react-router for navigating to a person's detail page and backwards.