This post belongs to the Phoenix and Elm, a real use case series.

It has been a long time since my last post. Last September I joined The Book of Everyone, a very cool startup not only with an awesome product, but with a very passionate and talented team as well, and I have been very busy since then. Apart from working for such a team, another of the main reasons for joining was that most of the current stack is Elixir and Phoenix, so it was an excellent opportunity for solving real problems using some of my favorite technologies. At that time, I also started to play around with Elm, the functional programming language for the web, rewriting some of my pet projects like Phoenix Battleship. As a React/Redux fan and recently converted functional programmer, I felt it was the right path to take. Once I was comfortable enough with the syntax and architecture, I proposed building a proof of concept in Elm as the new front-end for an internal tool that we use at TBOE for creating landing pages. A few weeks later, the POC was ready, pushed to production, and has been working without a single runtime error since then.

I am having so much fun coding in Elm that I can't resist writing a small series about creating a small SPA, covering basic topics such as integrating Elm in a Phoenix project, routing in an Elm program, making HTTP requests and sockets support. So let's get started!

The people who either know me well or have worked with me know that I am extremely passionate about any new technology that I start learning and I like. However, in the case of Elm, it has been different. I first heard about Elm almost a year ago, while learning Elixir and doing my first pet projects, and I think it was reading some kind of article about Redux. In fact, in thanks to that article, I discovered that Elm's architecture inspired Redux and that caught my attention immediately. After an initial try, I decided that learning Elixir was enough task, and left Elm for later, but I kept reading articles and tutorials about it. It was not until when version 0.17 came out, that I decided to give it another try, and I have been coding Elm almost every day since then, just for the joy of it most of the time. Joy is a word that truly represents to me the experience of coding in Elm because:

And I could probably keep adding more reasons to the list, but let's leave it there and start with the fun part.

Before continuing, let's take a closer look at what we are going to build. If you have been following my blog, I am sure you will find it familiar as it is the same concept I have been using since I started writing about Rails and React. 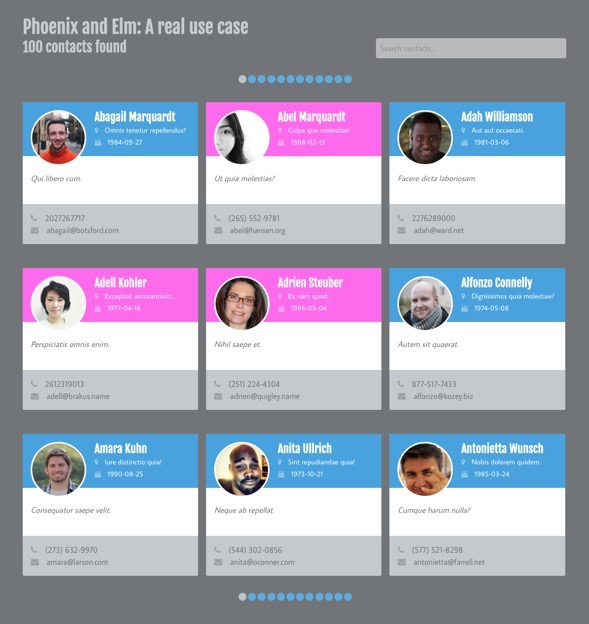 Starting from a new Phoenix application, let's create the only model we need:

This creates the following migration file:

The previous command also creates the basic model/schema with the bunch of fields:

This is all we need at the moment. Eventually, we will be adding full-text search support, but we will see that later on. Don't forget to run the migration task before moving on to the next step:

In order to add Elm to the project, we first need to install the necessary npm packages:

We are going to be placing all the Elm stuff in the web/elm folder, so we have to update the brunch-config.js file, adding the following changes:

Now we can add a very basic Main.elm file with the Main module that simply returns a Hello, World! message:

Next, we need to update the main app.js file to import the javascript generated by Elm and render the result:

We want to embed it in a div with the elm_target id, so let's go ahead and add that div in the corresponding Phoenix template:

Now we are ready to start the Phoenix server and check out that everything is working fine. The output should be something similar to this:

Visiting http://localhost:4000 should render the Hello, World! message in the browser.

Enough for now. In the next part, we will dig a bit more in the Elm architecture, define our application's state and start coding our first Elm modules. In the meantime, you can take a look to the repository with the final result or see it in action in the live demo.