After using Facebook's React JS for the last months and for different projects I have to say I'm as excited as the first day of using it. I feel that as a full-stack developer I have finally found a front-end framework which fits perfectly to my needs. This doesn't mean I think it's better or worse than any other framework, it's just different and exactly what I need for the current projects I'm involved in.

Then I met Flux.

Flux is an application architecture created by Facebook for building client-side applications.

It's more of a pattern rather than a formal framework, and you can start using Flux immediately without a lot of new code.

This means that is not a framework by itself, it's more like a way of structuring applications using React JS components and how they communicate thanks to the unidirectional data flow. To do so it introduces 4 new concepts:

Stores are the ones to keep and manage the application's state for a specific domain. This means that there can be multiple stores to manage the state of multiple components like a list of records to display, the visibility of a modal window, validation errors for a form or whatever the components used might need. They register with the dispatcher and provide callbacks which receive the action as a parameter, so they can update their state via hooks for specific actions. When the change their state they broadcast an event declaring so, and components listening may use the new state to update themselves.

Helper methods that trigger a dispatch to the stores and may include a payload of data. There can be two types of actions:

Views are the React components we already know and Controller-Views are parent components which receive the state from the stores and pass it to their children as props.

After understanding this simple principles and how the data flows, you can take a look to it's git repository where you can find the source code of the dispatcher and some examples to start creating your own Flux implementation. There are also some open source implementations for you to use like:

They all have their good parts and add their own value to Flux, but my chosen one is Marty.js and it's the one I'm actually using. Some of the reasons are:

On my next post I will write about how to use Marty.js as the front-end framework for a Rails application. If you have read my past post series about Rails and React you'll be familiar with the final result: 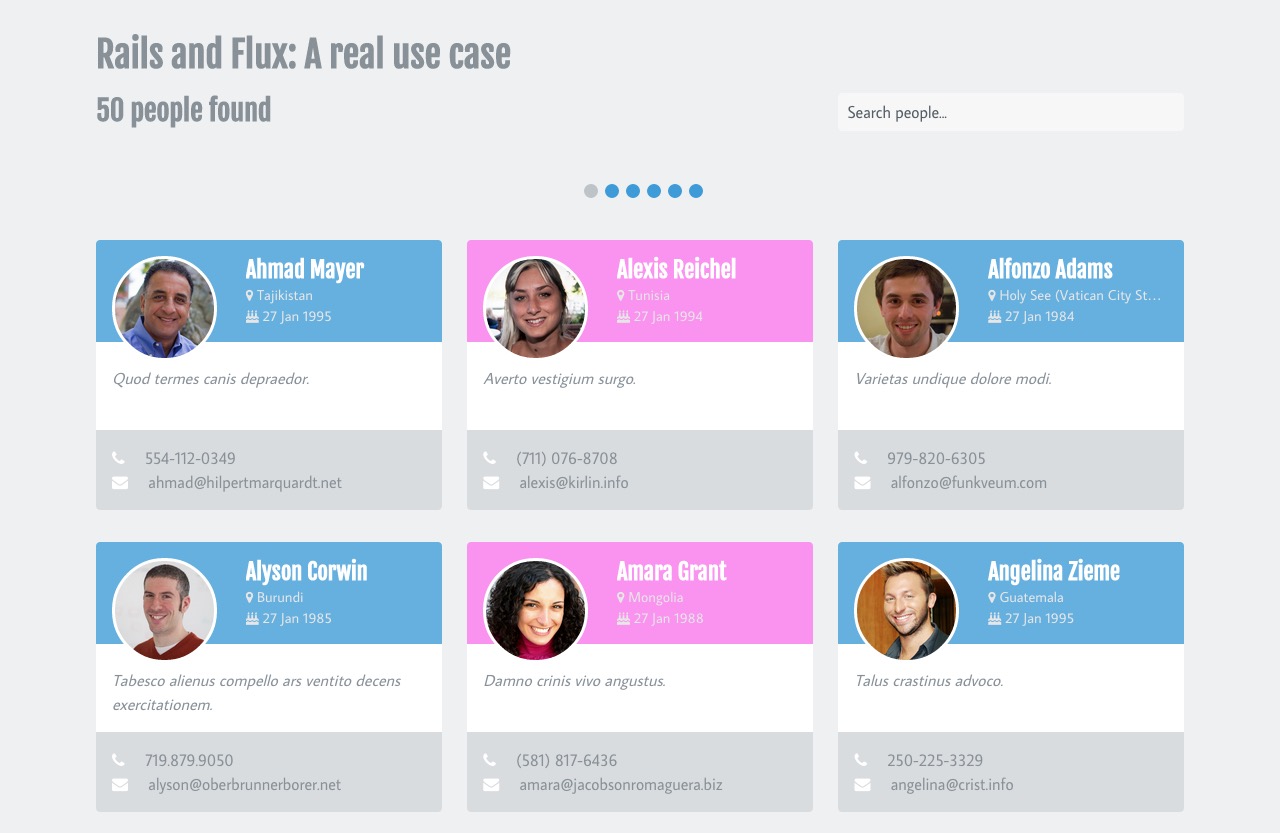 So stay tunned and happy coding!