This post belongs to the Trello tribute with Phoenix Framework and React series.

Trello is one of my favorite web applications of all time. I've been using it since its very beginning and I love the way it works, its simpleness and flexibility. Every time I start learning a new technology I like to create a real-case application where I can put in practice everything I'm learning into possible real-life problems and test out how to solve them. So when I started to learn Elixir and it's Phoenix framework it was clear to me: I had to put in practice all the awesome stuff I was learning and share it as a tutorial on how to code a simple, but functional, tribute to Trello.

What are we going to build

Basically we are going to code a single-page application where existing users are will be able to sign in, create some boards, share them with other existing users and add lists and cards to them. While viewing a board, connected users will be displayed and any modification will be automatically reflected on every connected user's browser in real-time a la Trello style.

Phoenix manages static assets with npm and builds them using Brunch or Webpack out of the box, so it's pretty simple to really separate both the front-end and the back-end, while having them in the same codebase. So for the back-end we are going to use:

And to build the single-page front-end we are going for:

We'll be using some more Elixir dependencies and npm packages, but I will talk about them as soon as we use them.

Elixir is a very fast and powerful functional language based on Erlang and with friendly syntax very similar to Ruby. It's very robust and specialized in concurrency so it can automatically manage thousands of concurrent processes thanks to the Erlang VM. I'm an Elixir newbie so I still have a lot to learn, but I can say that from what I've tested so far it is really impressive.

We are going to use Phoenix which is Elixir's most popular web framework right now which not only uses some of the parts and standards that Rails brought to web development, but also it offers many other cool features like the way it manages static assets I mentioned before and, the most important to me, real-time functionality out of the box through websockets easy as pie and with no need of any external dependency (and trust me, it works like a charm).

On the other hand we are using React, react-router and Redux because I just love this combination to create single-page applications and manage the their state. Instead of using CoffeeScript as I always do, this new year I want to start using ES6 and ES7, so it's the perfect occasion to start doing so and get used to it.

The application will consist of four different screens. The first two are the sign up and sign in screens. 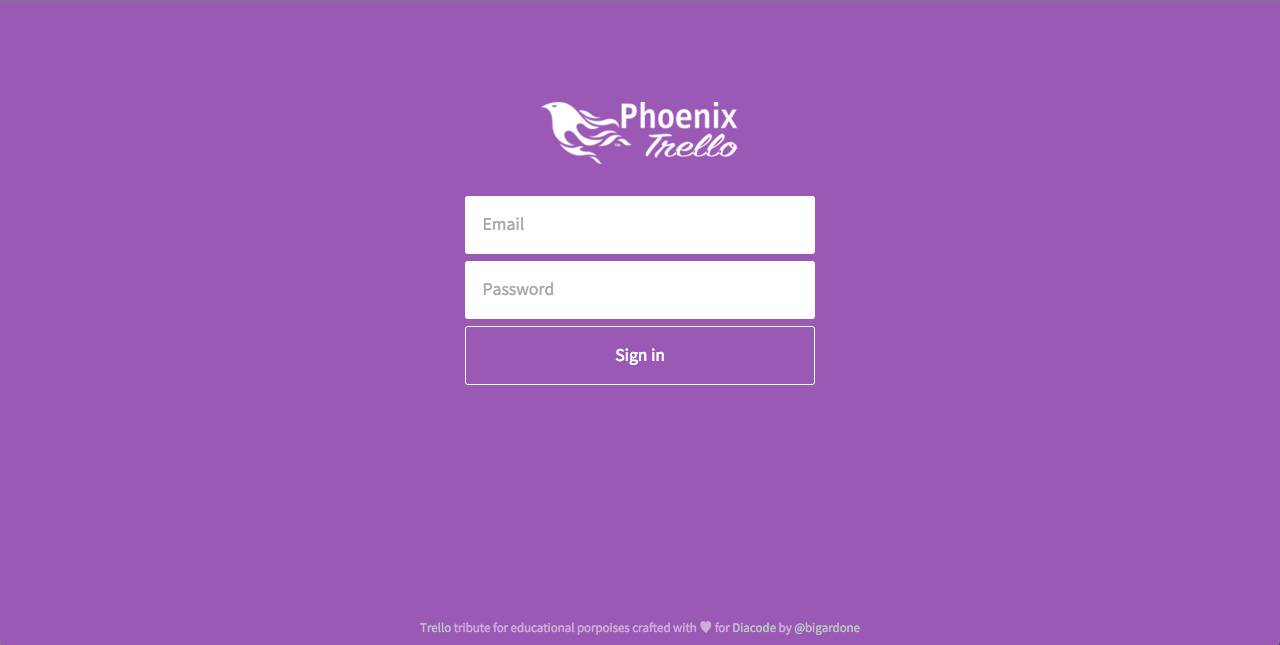 The main screen will consist of the list of owned boards by the user and the list of boards he's been added as member by other users: 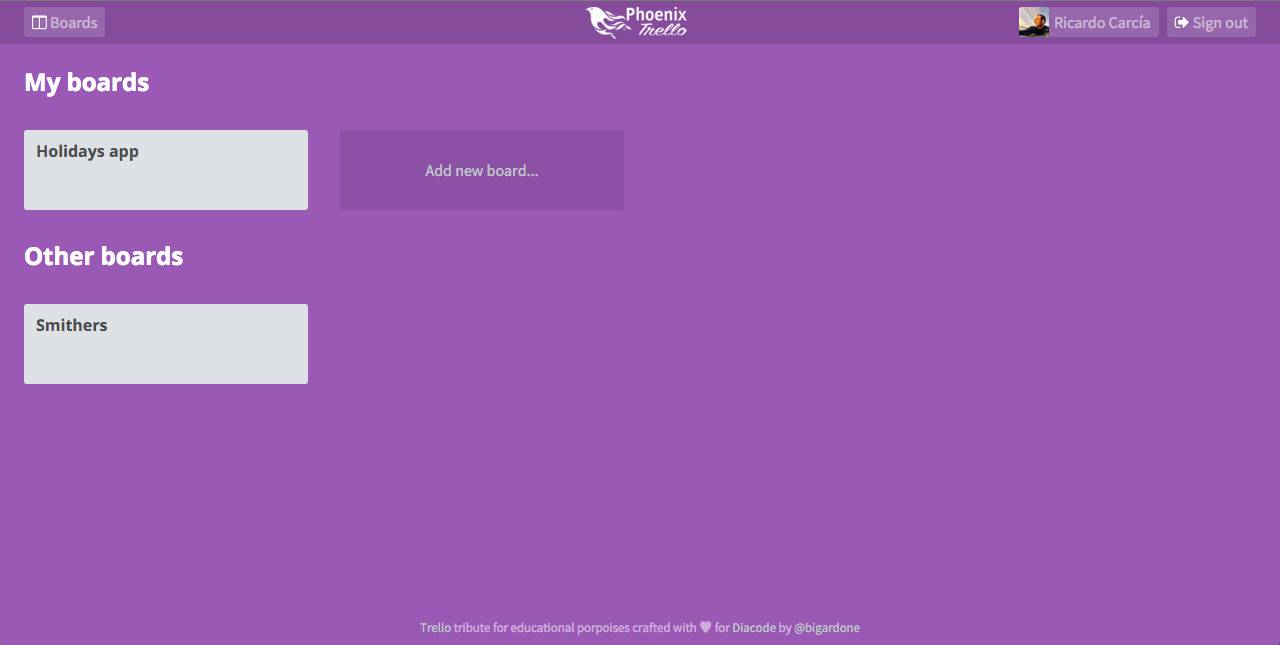 And finally the board screen where all users will be able to see who is connected, and manage lists and cards around. 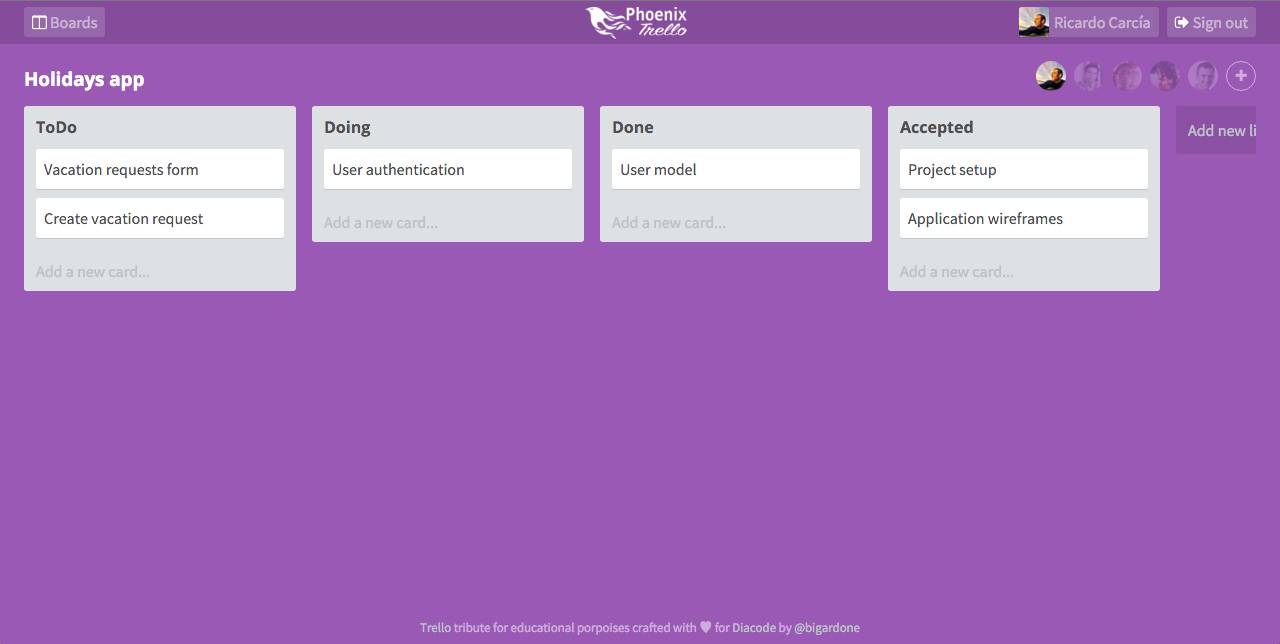 So that's enough talk for now. Let's leave it here so I can start preparing the second part in which we will see how to create a new Phoenix project and what changes we need to make in order to use Webpack instead of Brunch and how to setup the front-end foundations.