After cloning Trello and Toggl I wanted to try something completely different for my next side-project on Elixir and Phoenix. Therefore, after reading more and more about OTP, GenServer, Agent and GenEvent I was so excited about all these new elements to me, that I wanted to build a project where I could put all of them to work together. I also wanted to create something fun with a strong real-time touch, so I ended up knowing that I had to build some kind of multiplayer game. And what better game than the Good Old Battleship game?

I draw a lot of diagrams since I started working with Elixir. Before coding a single line of code I like taking some time to think about what I want to do and what elements are going to be involved in terms of processes and messages. Once I have an overall idea, I start drawing some sketches representing all that communication flow. I have personally found this very helpful, once you have every element clear in terms of what role is it going to take and how it will communicate with the other system components, coding it is definitely much easier. So after taking some time I finally ended up sketching something similar to the following diagram: 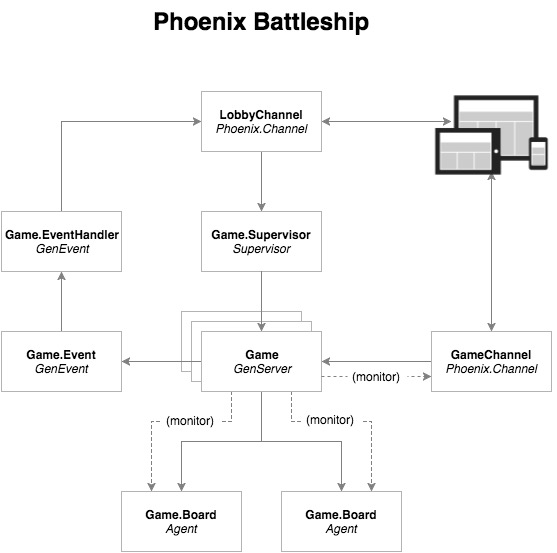 Before continuing any further I'd like to say that for this tutorial series we are not going to dig too much into the front-end, which is very similar to the Trello clone. In other words, it's based on the same React and Redux implementation with some subtle changes. I've also started learning Elm, so I will probably try to refactor all the front-end and write another tutorial about it... with some luck :)

Having this said, let's take a closer look at the involved components:

A default Phoenix Channel. Users will join it when visiting the game's main page. It will be in charge of broadcasting updates of the existing games, and it will also create new games with the help of the Game.Supervisor.

This module will use the Supervisor behaviour. It will be responsible for creating new Game processes and supervising them, as well as for returning the list of the current games that are actually taking place.

Will use the GenServer. This processes, supervised by the Game.Supervisor, will store the state for a given game. The state will consist of a map containing the ids for both the attacker player and the defender, their GameChannel pids, the list of shot results, chat messages, etc. It will also monitor GameChannel and Game.Board processes, to detect any error and stop the game.

Another Phoenix Channel. The main interface between the player's browser and the Game process. It will handle things like joining an existing game, placing ships in the grid, chat messages, shooting, etc. Monitored by a Game process so in case the channel's process ends, the game process ends as well.

This module will define the basic structure of a player's board. It will internally use Agent for managing a player's board state. Its state will store the list of ships, the grid map, hit points, etc. It will also have additional functionality related to placing ships and taking shots.

This module will be added as a worker to the main application supervision tree. It will start a new GenEvent manager and set up its event handlers.

This module will use GenEvent to handle event messages from the previous Game.Event manager and, thanks to the LobbyChannel, broadcast every current game change to any connected visitor's browser.

Despite having represented all these different elements, we actually don't need them all to build a simple game like this. But implementing them will give us the chance to learn some useful concepts related to OTP, the differences between GenServer and Agent, monitoring processes and creating event handlers. I have really enjoyed building it and putting all the pieces together, so I hope you enjoy it too. Therefore, on the next part of this series we'll start digging deepereer into them. Meanwhile, feel free to take a look to the final (but still in progress, though) source code or challenge a friend to a battleship game... Yo ho ho, let the battle begin! 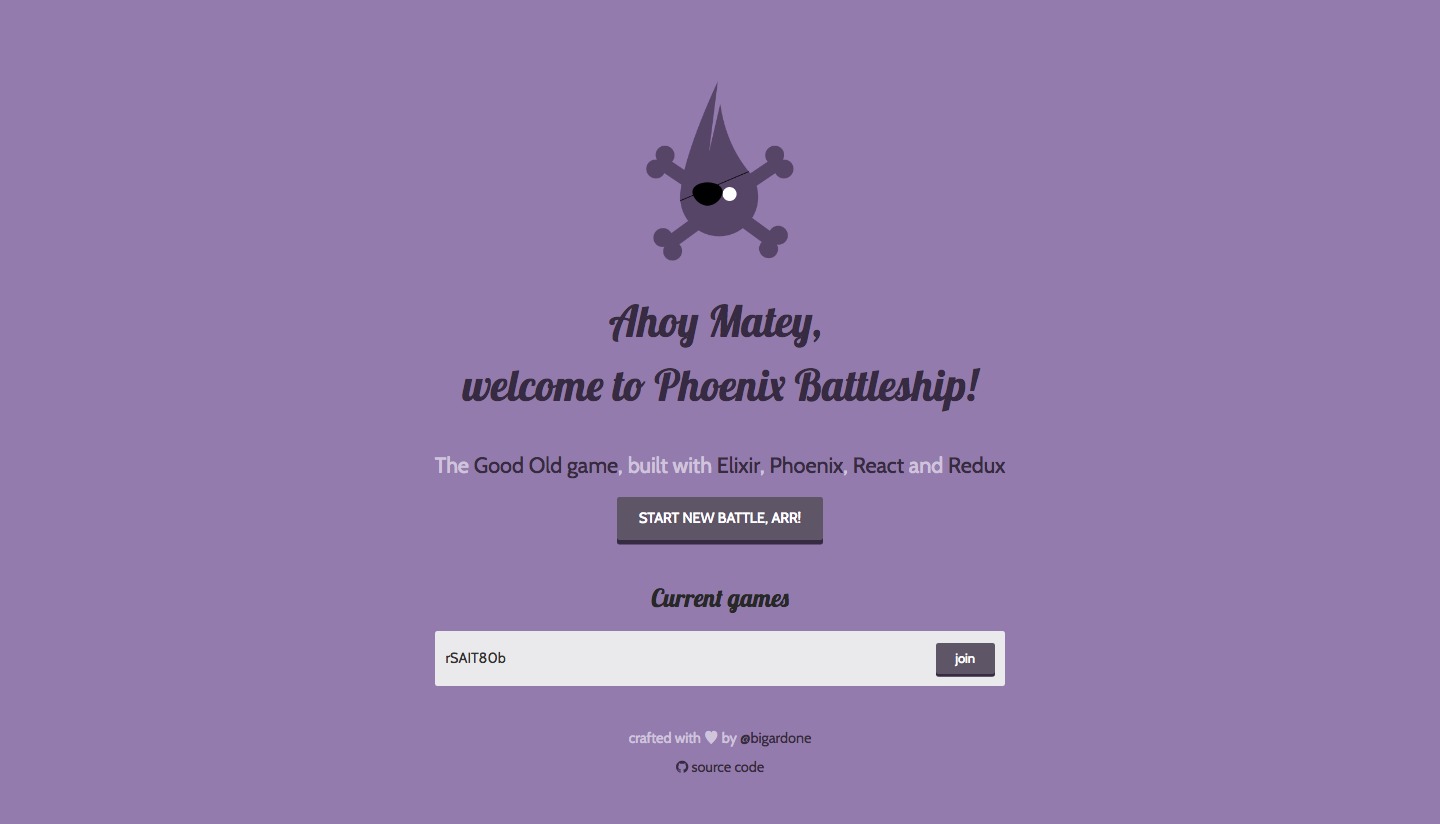