The lobby channel and game supervision

On the previous part of this series, we did a quick tour through the main components which form part of our new game. Recalling the diagram, two of these elements are the LobbyChannel, which is the interface between the player's browser and the existing games, and the Battleship.Game.Supervisor, responsible for creating new games and listing existing games. 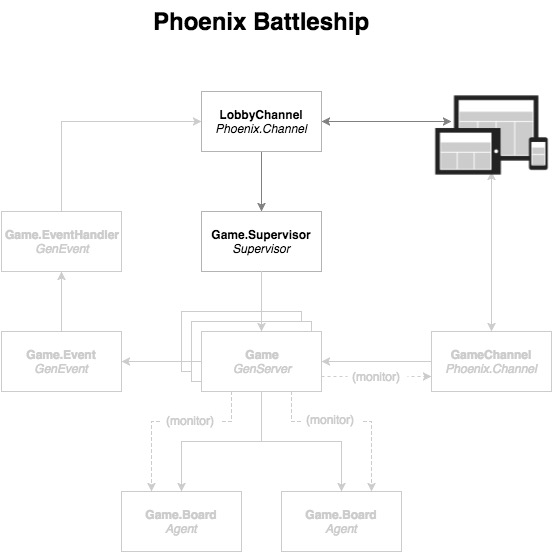 Before continuing any further, there's an element not displayed in the diagram which is relevant and worth to mention. This element is the main controller of the application, the Battleship.PageController. Its importance comes from the fact that in its index action is where the random player id is generated.

We are going to use this id to connect the player to the socket, and to identify him in the games he plays. Here is how its implementation looks like:

Having explained this, let's get down to business. Every time a new player visits the game, whether he goes into the lobby or directly to a single battle, he is going to join the LobbyChannel automatically. Before continuing we need to make some changes to the project. Phoenix by default creates a default UserSocket module, which I have renamed it to PlayerSocket, so let's modify the endpoint.ex file to reflect this:

The LobbyChannel responsibilities include creating new games, returning the list of the current games that are taking place at that particular moment and broadcasting what's going on in any of these games. Let's take a closer look at its functionality:

page of the game. Using the Battleship.Game.Supervisor if fetches the games that are taking place and returns them through the socket, so the list of games in the Redux store is populated and displayed to the player.

As with the player id generation, the game_id generation also worths mentioning. My original implementation was the same as with the player id, but thanks to Julius Beckmann (aka h4cc), we now have a really nice mechanism for generating cool pirate game ids. You can check all the details in his pull request.

After describing the LobbyChannel responsibilities, we have seen that it is tightly coupled to the Battleship.Game.Supervisor module. When a battle starts, we want to keep a record of the data related to it. For instance, we want to track which player started the battle (the attacker), who joined as the defender player, the chat messages between both players, the game turns, whether the game is over or not and who is the winner. We are going to store this data in separate game processes, one for each game taking place, supervised by the Battleship.Game.Supervisor. This supervisor is not only going to spawn new Battleship.Game processes, but it is also responsible for retrieving the information of any current battle inside its supervision tree. Let's take a closer look at its code:

There are some details worth to mention about its implementation:

Let's leave it here. In the next part of the series, we are going to talk about the GameChannel and the Game module, and how their processes are dependent on each other thanks to Elixir's processes monitoring. Meanwhile, feel free to take a look to the final (but still in progress, though) source code or challenge a friend to a battleship game.